A snowy winter set Colorado’s whitewater rafting industry up for what river runners describe as the perfect boating season. Snow depths throughout the state are up to 120% of average, promising that warming temperatures will soon buoy whitewater rafting destinations such as the Arkansas River, which hosts 40% of the state industry’s marketshare.

Arkansas River outfitters started opening for the season in April. …

“We had a wonderful day doing a scenic trip with their children, who had never been rafting before,” Treleani said. “The family went skiing in Breckenridge and decided to also go rafting on their Colorado vacation. It’s really great to be back on the water.”

“The sport of fly fishing holds many therapeutic benefits that encompass the physical, mental and emotional,” said Daniel Morgan, communication director for PHWFF.

The beauty and peace of nature, the physical challenges of fly fishing and the fellowship of the PHWFF programs all contribute to positive and healing experiences for veterans. The Collegiate Peaks Chapter of Trout Unlimited is privileged to partner in this effort.

PHWFF began in 2005 at Walter Reed Army Medical Center, and has expanded to over 200 programs in 50 states and Germany. There are also affiliate …

PRINCETON — Princeton Boy Scouts from Troop 1063 recently returned from a trip of a lifetime.

After spending nearly a year fundraising and planning for the trip, five scouts, one leader and a parent chaperone took the train to Colorado, where they spent two days hiking Pikes Peak and whitewater rafting the Royal Gorge on the Arkansas River.

The crew spent their time in Colorado Springs, where on Day 1, they warmed up their hiking skills on a tour through Garden of the Gods, which is a public park full of red rock formations.

Some people say, "There is no 'I' in team," but when individuals work together towards a common cause, they can move mountains! They can also navigate whitewater rapids on Colorado's Arkansas River, leverage their strengths and have tons of fun doing it!

Members of the Arkansas River Outfitters Association (AROA) are consummate teambuilding pros and guides in outdoors experiential learning. Many times each day, they give rafters a sense of accomplishment with benefits that lift all boats back on the job or in the community.

Colorado's Arkansas River is one of the biggest classrooms in the world. There are six major rafted sections with more than 80 named rapids covering 101.8 miles. "AROA … 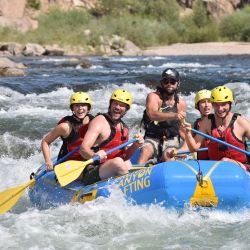 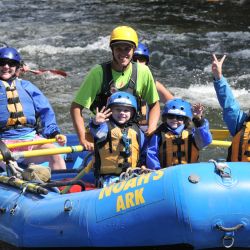